The inaugural Okanagan Graveller Event at Big White Resort in Kelowna, BC offered 2 days of elevation, harsh weather and huge accomplishments. We turned up in force with some of our Giant and Liv Ambassadors to have some fun.

Saturday morning started with some sun at the top of the mountain resort of Big White. With 140 riders lined up to face the challenge of the Okanagan Graveller the ride left the village and descended the 15kms to the first gravel section. This is when the enormity of the challenge faced most of the riders. Some huge puddles from recent snow melt and downpours were a rude awakening. The pace was fast and furious for the first few hours until one by one rider dropped out of the front pack due to mechanicals or intense pace. One such victim was local favourite and Giant Ambassador Jacob Rubuliak. The first rocky downhill would see him puncture and then lose time due to a pump malfunction. This did not dampen his spirits as he would face multiple mechanicals and still finish the first day in 11th place.

Gravel extraordinaire Michael Van Den Ham was coming off a Hat-trick of wins over the last few weeks and was up to the challenge of taking on Ian Boswell, Adam Roberge and Cory Wallace. His race started great and as all the riders fell to the wayside one by one, he and Boswell took to the lead. On the loop, down around Myra Canyon Boswell had opened up a gap of 4 minutes and Van Den Ham was alone in second for the rest of the long climb up to the resort.

Jacob Rubuliak said "One of the best moments of the race was cruising across the KVR trestles nearing the end of the race, taking in the amazing views in all directions! Always will be one of my favourite sections of trail." 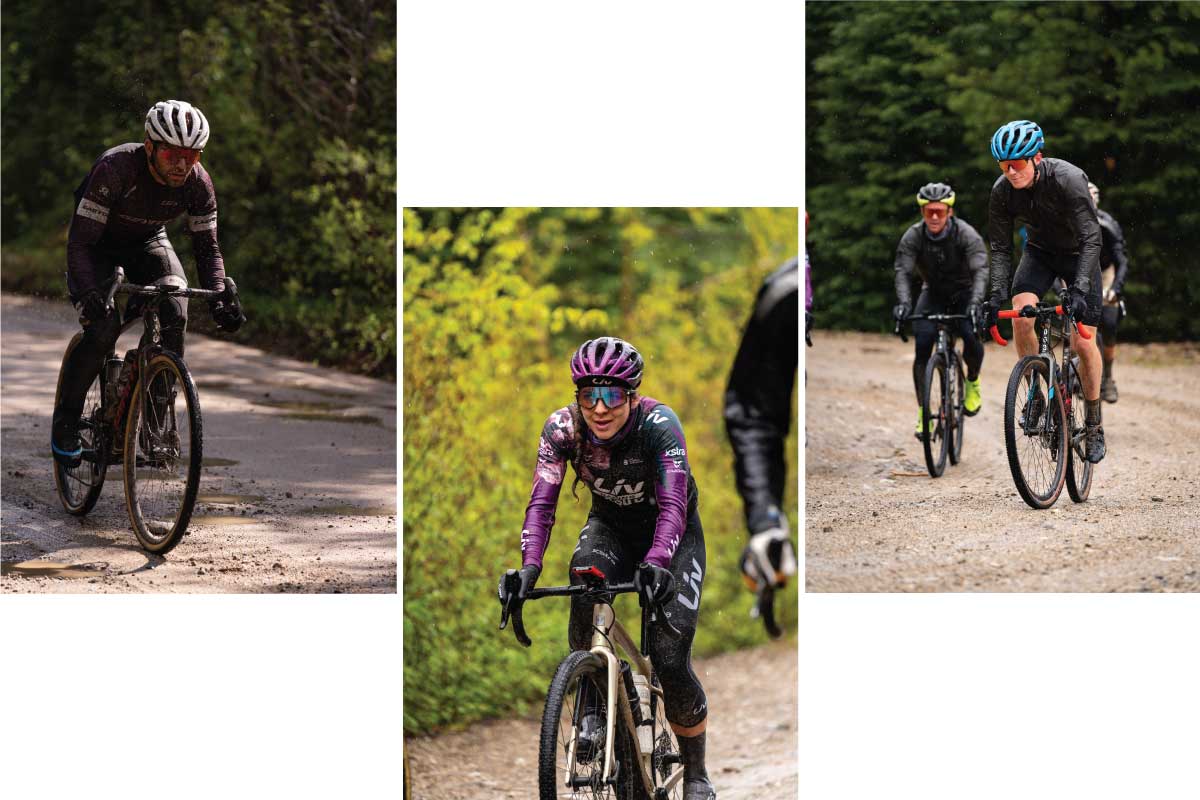 Meanwhile in the 120km Race - Olympian, Canadian National champion and Tiktok Influencer Alison Jackson of Liv Racing Xtra was using the event to prepare for the defence of her National Titles later this month in Alberta. She used her Roubaix skills and road power to great success by winning the overall on Saturday by a comfortable 4-minute margin. Giant/Liv Canada staff members Paul Mc Carthy (10th overall) and Vanessa Lebrun (28th overall, 4th women).

Sunday's stage was shorter at 70kms but the rain was heavy and the going very slow. Once again the race left from the Big White Village centre and hit the fast downhill road section. The out and back lap would see all of the main contender's group together until the last climb. Michael Van Den Ham, Alison Jackson, Noah Rubuliak, Cory Wallace and Ian Boswell all came to the finish line together for a sprint. Jackson and Rubuliak took the risks in the puddles and duked it out for the victory. The local boy Rubuliak just taking it by half a bike length.

In the overalls, Boswell took the Open win ahead of Michael Van Den Ham. With Jackson taking the win in the BLOG 120km overall.

After finishing, Michael had this to say " I've done 200km gravel races before - for that matter, I've done 200mi gravel races - but I've never done a course that finishes in as hard a way as this one. With 40km left and well over 1000m of climbing left, the OK Graveller truly is one of those gravel races that absolutely everyone - from pros to first-time racers - will be challenged by and know that they accomplished something big just to get across the finish line. If you want to do this one next year, don't kid yourself into thinking it'll be fun 100% of the time. Oh, it will be fun for parts, but it's also going to be hugely hard and you'll probably want to quit at some point but when you don't just finish this monster is something you'll be proud of for weeks to come!

"I had a pretty tough bit during the race. I had turned onto the bottom of the final climb about 10 minutes earlier and went from feeling pretty strong to barely turning over the pedals in that timespan. I remember wanting nothing more than to stop and stand on the side of the road for a while but just when I was thinking I might actually take my legs up on that offer, I turned a corner and a big black bear was sauntering off the road and into the woods. Needless to say, I didn't want to stop quite so much after that!"